The American house spider is an extremely common spider that is fairly likely to escape notice since it tends to build its tangled web in secluded locations. Its behavior on its web is quiet and efficient, so it generally does not draw attention to itself. There are several species of this genus, Achaearania. Their coloration consists generally in patterns of shades of brown, and they are rather dull in appearance, all of which makes it more easy for them to slip into the background. They are not known to bite people with any high degree of frequency, and their venom is not known to be dangerous to human beings.

Though these spiders aren’t a danger to your family, if you spot an American House Spider in your home,  make sure to call the experts at All Seasons Pest Control for help.

American House Spiders do not wander around inside one’s house except to find a secure place to build a web. Once they have a web they are quite happy to stay there waiting for flies and mosquitoes.

Like many predators, these spiders seem to have no idea that they might become the prey of some other animal. If they are removed from their webs they are rather helpless because they have such poor vision, and their only concern seems to be to leave the uncomfortable place they find themselves in and find their own web or build another one.

Caulking the cracks, crevices, and holes in the house so the spider can’t walk right in is the first step in control. If you’re dealing with an infestation or are unsure of where these American House Spiders are entering your home, contact the experts at All Seasons Pest Control!

They are not known to bite people with any high degree of frequency, and their venom is not known to be dangerous to human beings. 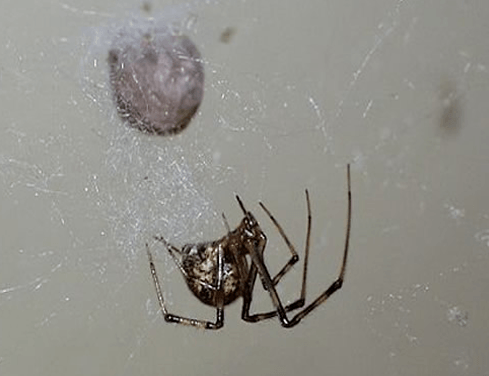